There were numerous reports of flooding across the province

The heavy rain that hit Malaga Province over the last 24 hours has forced road closures
On the one lane A-92-between KM78 and KM80 in the direction of Malaga one lane was closed by rain. On the A-2101, near the A-405 to San Martin del Tesorillo, in the Campo de Gibraltar, was closed between KM markers 2.5 to 6.8 because the road has flooded after the overflowing of the river Hozgarganta.
The A-343, between Antequera and Zalea, in the municipality of Pizarra, was closed to traffic at kilometer 36 due to the accumulation of water on the road..
The A-384, between Arcos de la Frontera to Antequera, the road was closed at KM116 and the A-7202, Archidona to Villanueva del Trabuco, was also closed
Most roads are now open but the MA-8301 between Estepona and Jubrique remains closed
The was also flooding on numerous side roads across the province
In Cártama Estación in the area of Fahala two families and along with several families in the area of Doñana were evacuated Also in Santa Amalia (in Alhaurin de la Torre ) and Doña Ana (in Cártama ).35 homes had to be evacuated.
Further inland in the mountain town of Arriate 20 homes were evacyated as water levels rose to around 3 feet
In some areas schools had to close as students and teachers could not reach the schools due to local flooding. 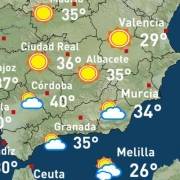 Another Weather Warning For Malaga Province

Cold Spell To Last Until Wednesday Across The Province

Snö i Málaga
Scroll to top